After three years of debating on whether I was going to have to replace my sunken concrete or use other methods, I finally decided on Metro Concrete Raising. Mainly due to a referral of my neighbor and then the cost. Let me tell you, I am really glad I did! First, Randy came out and gave me a competitive bid and guidance on what would work and what would not. Second, I decided to go a different direction on my front walks, only because of the aesthetics of having the holes on filled in. That was a mistake. When the competition started the job, the gap next to my stoop and porch widened! I had them stop before they could get started. I called Metro because they were going to do my patios in a couple of weeks. I spoke to Phillip who educated me on what could be done! The day finally came. It was late in the afternoon before Nick and Aaron showed up. They had been on a difficult job most of the day. Nick did not know that I had changed my mind for them to do the front walks as well. I could see what he was thinking, it's going to be dark in a few hours! The two of them got right to it and did an amazing job! They were quick and effecient. They worked fast but hard to make sure it was right. I am so pleased I went with Metro Concrete Raising. They saved me thousands of dollars over replacement (which I really thought was going to be my only option) and were well under the other option as well. So my many thanks to Metro Concrete Raising, but special gratitude goes out to Nick, Aaron and Phillip for a great job! Highly recommended!

We needed the asphalt torn up and replaced with a cement apron in front of our garage. Metro Concrete Raising made the process straight forward and easy. The results were better than I envisioned! We are very pleased with the work completed and the service!

After checking out several contractors we chose Metro Concrete Raising to replace our somewhat large sidewalk. Randy was out twice to answer questions before the work even began. The crew, led by Aaron, did a great job. We discussed options about replacing both the sidewalk and front step. He was very honest in answering questions, describing outcomes and giving suggestions when asked. He was clear and understanding, and in the end we opted to replace just the sidewalk which saved us money. They also did a great job re-configuring the size of the slabs so future cracks will be much less likely to occur. In addition, the entire crew were courteous, friendly, hard working and did a beautiful job! I'd highly recommend this company. They have great customer service and do quality work!

Second time customer to Concrete Raising and all because of great results. My cement slab looks just great and have piece of mind that the work was done correctly. What a great staff to work with.

I highly recommend this company. Excellent workmanship and crew. They go above and beyond. We had a slab poured for a shed and another by the back door of our garage. They cleaned up everything as though they had not been there. They even back-filled around the slab by the garage and put down grass seed. Excellent value. You won't go wrong by hiring them.

The guys did an excellent and professional job on my walkway and back patio. I would highly recommend them.

We were very pleased with the work done. Great clean up and reasonable prices.

I had my sidewalk raised, front step filled and garage floor raised. They did a great job for a reasonable price. Very happy with the results.

Metro Concrete Raising was wonderful! They were responsive to my call, came quickly and did a beautiful job. Very competent. I would definitely recommend them and use them again. 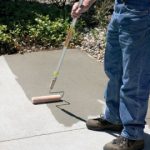 Concrete paving gets dirty like any outdoor surface. It also may acquire stains from oil, rust and mold. Periodic cleaning will restore your concrete’s appearance.